Growing up with the Movies

History was made in New York on October 6th, 1927 when the very first spoken voice in a feature film was heard. The voice belonged to Al Jolson and the ground breaking movie - The Jazz Singer. The reaction by the theatre audience was immediate - they rose to their feet, applauding ecstatically. 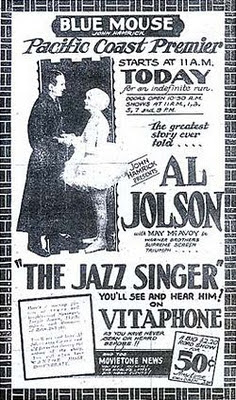 ﻿The first Indian talkie, Alam Ara, was released on March 14, 1931, at the Majestic Cinema in Bombay. One report says "There were huge crowds outside the theatre.Tickets were sold 'in black,Police aid had to be summoned to control the crowds ....Four¬anna tickets were quoted at Rs.4 and Rs.5." It was advertised as "All Living, Breathing 100% Talking Peak Drama, Essence of Romance, Brains and Talents unheard of under one banner.The audiences went crazy over Alam Ara and Indian films haven't stopped taking or singing since ...

Going to movie halls, talkies, tent cinemas or a theatre was great fun. The very thought of going out added a special dimension to entertainment in the days and times long forgotten – wondering about what to wear, being on time, how to reach the theatre and whether we would get tickets and so on, added an element of suspense to the ensuing excitement. In the absence of any other form of audio visual entertainment in the 50’s, 60’s and 70’s, watching a movie was the ultimate entertainment experience.

Bangalore, being a cosmopolitan city, played host to movies in different languages – Kannada, Tamil, Telgu, Hindi and English. The theatres were mainly located in the Kempe Gowda road, in the Majestic area and in and around MG Road, while a few could be found scattered all over other parts of Bangalore. In its heyday, Bangalore boasted of having the largest number of movie halls in the country – some of them were a treat to watch – The Alankar in the Majestic area and Lido at the end of MG Road were luxurious by any standard and set a new bench mark in movie viewing.

The architect of Bangalore Attara Kacheri (Karnataka High Court) Arcot Narrian Swamy Mudaliar constructed Plaza theatre in the year 1936, modeling it after the Picaadilly Circus in London. It was one of the oldest theaters in Bangalore.


Residing in Shankarpuram, South Bangalore, meant watching movies in close by theatres. All the theatres had to be within walking distance. We were always short of cash and with Rs 5 as pocket money there was very little one could do. So we walked to the movie theatre. Our favorite haunt was ‘Vijayalakshmi’ theatre located in Chickpet which showed English reruns. Seetharam knew a short cut which would take us less than half an hour to reach the theatre. The route was intricate with endless twists and turns often involving going in and out of stranger’s homes - so if Seethu was absent – there was no movie for the rest of us. The best part of watching a movie back then was the cost- the morning show was always at half the price of regular shows and we as students got another 50% off -this meant we paid Rs 1/- per movie. Once there, we invariably bought sliced cucumber with green chili sauce or plain peanuts. If someone felt slightly rich, he would treat us to pineapple slices with salt and pepper. The movies we saw were all action movies – Our hero was Steve Reeves, a WWII Veteran with a Herculean body. We saw Hercules, Hercules unchained, The Trojan Horse, Goliath and the Barbarians and many similar films. Another hero was Victor Mature, starring in Samson and Delilah, Demetrius and the Gladiators, Zarak etc. Another strange Sword-and-Sandal movie we saw was, ‘Hercules, Samson & Ulysses’. The genre that was next in line consisted of war movies such as – The Guns of Navarone, Great Escape, Stalag Seventeen and so on. We also went and saw movies in Bharat - I remember watching a fascinating movie called ‘Living Desert’ , a Walt Disney production there, then there was Minerva and the bug infested Paramount talkies all showing English reruns at half the usual price. I used to enjoy watching Films Division Documentary shows with the golden voice of Melville de Mello reverberating in the theatre. If we were extra lucky we got to watch ‘Tom and Jerry’. And there were always the trailers of movies to come as fillers. In all, we had three hours of guaranteed fun.


We also went and watched Tamil movies in tents – along with a very rustic and earthy audience. Haricharana Babu’s father Mr Narayana Swamy wielded a lot of clout in the Gavipuram area and as a result we got to watch tent movies free. One could go in any attire, at any time, whistle loudly at the drop of a hat, shout, scream and generally immerse oneself in the movie. I did not follow Tamil, but it did not prevent me from watching MGR, Shivaji Ganeshan and the rest, belting out their lines in a bombastic ,theatrical style.


As we entered college, tastes changed and our sights fell on movies screened in theatres, in and around MG Road. Rex, Plaza, Imperial, BRV(Bangalore Rifles Volunteers) and later the Lido became our regular haunts. The genre of movies also changed and we started watching all the classics such as Ten Commandments, Benhur, My Fair Lady, Camelot, Becket, Oliver and many more. It was the turn of Richard Burton, Rex Harrison and Peter O’Toole to become our heroes. ‘From Russia With Love’ was released in BRV.Bond films were a craze by then and getting to see the first show was an achievement. Guru, Kumar, Mallesh and Seethu and self reached BRV at 0300 hrs in the morning and we were among the first 20 in the queue to buy tickets. The booth opened at 1000 hrs under police bandobast and shortly we were in possession of the prized ticket. I vividly remember watching ‘Wait Until Dark’ starring Audrey Hepburn as a young blind woman and Alan Arkin as a violent criminal. During the interval, Mallesh who was till then sitting next to an elderly couple wanted to swap seats. As the second half started, I realized that I was being made a scapegoat. The old man had probably seen the movie many times over and was rendering a running commentary to his wife in Kannada. When it came to the million dollar scene, where Alan Arkin leaps in the dark to catch Audrey Hepburn – the old man warned his lady ‘Do not get scared, he is going to leap any time now – watch, watch, he is about to leap …’ With the exception of the three of us, the entire theatre gasped and jumped up in fright.


Whenever Kumar ran short of funds, he used to sell old news papers to finance his movie ticket.DK Ramu’s father was an Executive Engineer in the State Electricity Board ,with MG Road under his jurisdiction. DK was often the recipient of passes for movie shows distributed by the theatre owners to keep dad in good humor. The largesse extended to some of us; on condition that we met his bus fare and tiffin charges. In this mutually beneficial arrangement ,we saw ‘Kissing Cousins’ an ‘A’ film starring Elvis Presley. For this land mark occasion, four of us dressed up in trousers and shirt to enhance our looks, hoping the ticket collector would allow us into an ‘adult’ movie without any fuss. We got to see a man and a woman kiss on screen for the first time. What an exciting experience! Eating ‘Puffs’ and ‘Peanut Bars’ in Plaza Theatre was the ‘done thing’ in those days.


Subash was the only Hindi movie buff. This put him in a great predicament. To get someone to go along with him meant shelling out for them too. So Subash paid for the bus fare, bought the tickets and got us snacks in the interval. Under his patronage we saw – ‘Rajkumar’, starring Shammi Kapoor and the darling of yester years, Sadhana and many more.


Finally, my adolescent movie going experience ended in NDA. Watching movies on Saturdays in the assembly hall was an extraordinary experience. All of us would be dead tired after all the physical punishments such as front rolling, frog jumping and carrying cycles on our heads. Getting inside the hall with no lights was an instant sleeping pill. I remember watching the titles of ‘Spy Who Came In From The Cold’ and falling asleep immediately thereafter.


In the navy, movies are an integral part of life at sea. In the old days, all ships carried a 30 MM projector and a large collection of movies. Every evening after dinner, a movie would be screened. One watched the movie in open air on the Quarter Deck with all the heavenly objects staring down upon us. The constant hum of the ship’s engines and the noise of heavy winds required extreme concentration if one wanted to follow the dialogues. It was not uncommon to hear ship’s announcements such as ‘Chief Quartermaster Bridge’,’ Fresh water tankey officer’s bathroom’ interupting and ruining a really romantic scene. We took a lot of Hindi movies to Riga and screened them very often .The Russians would come in hordes to watch Raj Kapoor starrers. Watching Russian movies required lots of courage and daring.The title was sufficient to keep one away –‘A Fish Factory in Astrakhan’ or ‘Drama in a gypsy camp near Moscow’ or ’The patriotic mine worker in Siberia’ or ‘Lenin in October ’ and for the more daring there was always ‘Lenin in 1918’ .


Open air movies with attached bars are a big hit in the army stations and clubs. With a little bit of ‘Elbow Bending’ one can get through the most horrible movie with panache. After a few down the hatch, it really did not matter if the movie was in English, Hindi or Swahili.


I used to shed tears very easily while watching sad movies.Watching Koshish was the mother of all crying experiences. My mother swore she would never sit next to me in a hindi film.I wept throughout the movie, into her pallu.


KM Nair had watched Sholay several times and knew the dilogue backwards.Much to our annoyance, he used to frequently render the Sholay dialogue.Being a Mallu, the delivery was very fast and sounded like several marbles shaken in a tin.Finally when self and Kats saw Sholay and heard Gabbar Singh’s slow and deliberate delivery we were a tad dissapointed as he did not speak like Nair.


Movie going as an activity has subsided over the years with TV and DVDs taking over this favoured past time. Most of the theatres in Bangalore have been sold to make way for Super markets, malls and shopping complexes. In their place, ‘Multiplexes ‘have arrived. We went and saw a Bond film in the famous ‘Fame Shankarnag Chitramandira’ with a right mix of style, elegance and opulence. 55 lavishly fitted recliners that stretch to 150 degrees at the press of a button takes you to a different comfort zone. Butlers serve International and local cuisine at your recliner and in the attached Gold Lounge, exclusively for Gold Class patrons.


Watching movies on the big screen has always been great fun and will remain so for many more generations. In a fast paced life, going to theatres once in a way is a great way to bond with – parents, children, grand children, friends et al. A simple packet of pop corn can do the trick.


Cheers to the BIG SCREEN

Posted by Samundarbaba at 2:40 PM